Guidance documents are often contained on the agencies web sites. 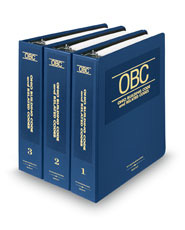 Regulations "adopted by reference" are not contained in the Ohio Administrative Code. You must locate the text in other documents. This is especially true of the building code, which incorporates the Ohio Building Code by reference (Print copy of the Ohio Building Code also available in the library KFO459.A1 A3 ). The General Index volume to the Ohio Administrative Code contains a list of documents incorporated by reference. The Ohio Legislative Service Commission and Ohio Secretary of State can provide the text of the regulations adopted by reference, if the text is not available otherwise.

New regulations are found in the Register of Ohio online and the Ohio Monthly Record in print, KFO440 .A4 A331.  These sources can also be used to find regulations in effect at a prior point in time.

The basic steps for Chapter 119 rulemaking are:

2. Agency files the proposed rule, fiscal analysis and rule summary with the Ohio Secretary of State, Joint Committee on Agency Rule Review (JCARR) and Legislative Service Commission. These documents are published in the Register of Ohio.

3. Agency holds a public hearing on the proposed rule.

4. JCARR reviews the proposed rule, unless exempt by statute. JCARR will tell the General Assembly if a proposed rule should be invalidated.

5. The agency finalizes the rule, and files a final rule with JCARR, Legislative Service Commission and the Secretary of State. The rule can not be finalized until 66 days after filing the proposed rule. The rule may not become final if the legislature objects.

6. The General Assembly can invalidate an adopted rule within 59 days after it was filed with JCARR.

What does this citation mean?