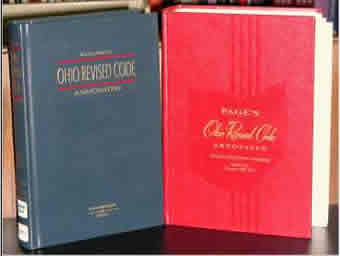 Step Two: Look at the History for the Code

STEP TWO: In Pages', underneath the text of the statute, you will see a section marked "History". The history section will look like this:

The above is the history section from the 2012 Page's Ohio Revised Code for Ohio Revised Code Section 5145.15. In Baldwin's, this section is also immediately after the text of the statute, and is known as the "Credits" section.

The history or credits section provides citations to prior versions of the Ohio Revised Code section in question. The citations are to sections from previous Ohio Codes, or the Laws of Ohio volumes. In the above History, "RS" refers to an Revised Statutes section, S&S refers to a section of the code published by Swan and Saylor, and GC refers to the General Code. All of these are historical codes which existed before the Ohio Revised Code. For more help concerning historical codes, see Diagram - Evolution of Ohio Statutes.

"Bureau of Code Revision 10-1-53, refers to House Bill 1 of 1953. This House Bill revised and renumbered the previous Ohio General Code to created the Ohio Revised Code.

The rest of the citations in the above example refer to Laws of Ohio volumes. The first number refers to the Laws of Ohio volume. After the "v" you will find the bill number (for example, H 494) or the page number (If there is no H or S before the number, it is a page number). Sometimes a citation listing the year of the General Assembly is given, instead of the volume number. For example, "1971 h 602". For a more detailed explanation of what these citations mean, see Ohio's Legislative History, Ohio Legislative Service Commission's Members Only Brief, at page 4-5.

Step Three: Locate the documents cited in the "history" or "credits" section

STEP THREE: Now you must locate the documents cited in the "history" or "credits" section. There are several ways of doing this:

The library has the older versions of the Ohio Revised Code in the Ohio Room, on the Superseded Code area.   Also in the Ohio Room are copies of the General Code, Revised Statutes and Swann and Saylor. The library may not have a copy of the Code for the year(s) you are interested in. In that case, you must use method 2, pull from session laws.

SInce 1927, session laws indicate what changes were made from the old version to the new.

1927-1969: Deletions indicated by asterisks and insertions by italics.

1969-2001: Deleted language reprinted with lines striking through it, and new language indicated in upper-case letters.

2001-present: Deleted language reprinted with lines striking through it, new language is underlined.